IF AND BEFORE you run a half, just remember: It’s NOT for the faint of heart. Everything –– the weather, the course, the prep, the sustenance, the running buddy, the end goal –– makes a difference between ending happy and ending miserable. 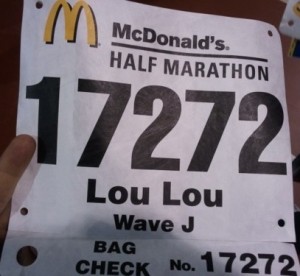 This was my 1st half-marathon. Ever.

Luckily for me, the course was a pretty, flat 13.2 miles through downtown, scenic, park-centric Richmond, VA. 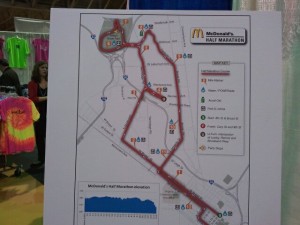 Unlucky for me, it was a 40˙ morning that felt like 20˙. My exposed hands were freezing and the race hadn’t even started. And I only trained up to 8.5 miles total.

But the race was sold out (which meant runners behind me, pushing me), and I had a running buddy. The best running buddy of running buddies, My little brother’s girlfriend, Vicki. We both were pretty avid runners at the time, but Vicki could still school me in miles per minute.

Those first 10 miles were glorious. I felt like I was floating on clouds. Like someone was pushing me the whole way. Maybe it was the flock of runners behind me. Or maybe it was my guardian angel, my aunt or my grandmother. Either way, I was utterly inspired.

The last 2 miles were agonizing. Just when I thought my feet would give way, a fellow runner renewed my inspiration. He was a chatty Jet Blue pilot who was just in town for 10 days preparing for his upcoming destination triathlon.

Me:: “Any advice for a new marathoner?”
Pilot:: “Yeah, get a job that allows you to travel and sign up for destination runs. That will push you to train and give it your all.”