Good mawnin! You’d be surprised, but way down yonder here on St. Charles Street it’s actually quite easy to find frozen margaritas, the pungent smell of old bay seasoning and people riding on horseback on any given morning. 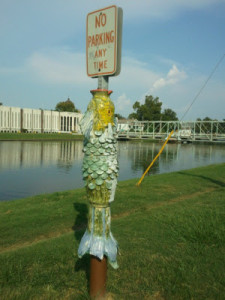 Today is Saturday, and I’ve seen and smelled the likes of all from my wooden porch swing.

The tourists must be checking into their hotels for the annual New Orleans Seafood Festival that’s happening this weekend.

But wait. Let’s back track to waking up to the circus outside my window at 8am this morning. Three things intruded into my open window and woke me from a deep sleep and made me hungry: the sound of the screeching St. Charles Street Car, the smell of fruity daiquiris, the smell of old bay seasoning.

Now I’m up, starving and wildly curious. Apparently, the party has started early.

Saddling up my things for a trek down to the Festival (sadly not on horseback but in my fancy riding boots nonetheless), I noticed a sign that said “Ongoing Seafood Celebration.”

Geez. It’s going to be a loooooonnnnnng day. Better bring the picnic blanket.

I boarded the street car in Uptown. Passed through the Better Homes & Gardens District (I mean, Magazine District). Paraded like a tourist through the night-life-centric French Quarter. And didn’t blink through the Detroit-look-alike sections of the city.

Some sections like the Ninth Ward, Jackson Ward and Treme still showed remnants of Hurricane Katrina from 5 years ago. Like it just hit yesterday. Boards were hoisted up on the window panes. Trees were still mangled from the wrath.

But in other neighborhoods like Audubon and Uptown, any signs of the Hurricane was long gone. Trees were well groomed and fixed up. Parks were clearly manicured weekly. 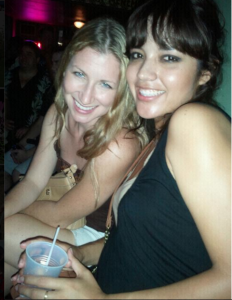 Finally, I arrived at the seafood festival and looking out into the sea of drunk fish, I sized up New Orleans in a matter of minutes.

It’s laid back and carefree on the surface, but has the adrenaline of an ongoing party running through its veins. And what I found after two hours: here the party beads and festive gear are always waiting to be thrown, whether it’s Mardi Gras or not.