Greetings from paradise! A runner’s paradise, that is. Sweaty, panting with staggered breaths, rain-soaked, completely butt-covered with pricklies from leaning up against a eucalyptus tree, I’m now wondering what the hell I got myself into this morning.  I was craving a run at Coyote Point, a 620-acre national park and protected shoreline jutting into the Bay, south of the airport between Burlingame and San Mateo – an undiscovered haven for runners and early birds alike.

Yet, despite the wet reception this morning, I’m still simply mystified by its topography, my brain still outlining the park’s rugged features. The sharp contour lines of the rocky beach. The 3-mile-long levy embanked on a hill. The dirt trails giving way to grassy knolls giving way to gravel car lots. The landmarks of sail boats, house boats, cruisers, abandoned yacht cub and landing docks forming a succession.

How is Coyote Point still undiscovered by the rest of the boating world?

Do boaters sailing off shore just not see the yacht club, marina, museum, camp ground or golf course beaming like a lighthouse, welcoming visitors? Does Coyote Point somehow disappear in a cloud of fog like the ship in Pirates of the Caribbean? More so my feet, I got to experience the entire island taking in every sensation during those 6 miles.

Running first, toward the South Bay (San Mateo), I ran along the perfectly manicured 9-hole golf course, remodeled playground and empty yacht club. The asphalt at my feet and brisk air on my face, the looming Eucalyptus trees were staring down on me like land gnomes without faces.

Hitting the water’s edge, I had reached Coyote Point Marina. There, a colorful line of sailboats and house-wafers gave way to full picturesque view of the Bay where the water speckled with windsurfers and amateur and professional sailors. Looks like these boats docked in 1972 and never left.

Exhausting that trail, I jogged in the other northernly direction toward Sausalito, secretly smiling, knowing that I didn’t pay the $6 parking fee. Past the open-air pavilion with fire-burning grills, there were expansive grassy areas with large sectioned-off picnic areas to suit whatever party you could possibly entertain.

It was only 8:36am but the grillers were already trickling in to set up camp, while families soon joined in tow with supplies and helping hands. A final landmark before hitting water: the Visitor’s Museum. Pointless seemed like, but an architectural beauty nonetheless. 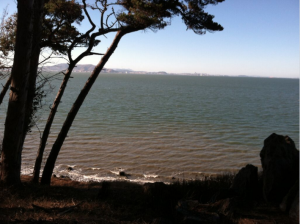 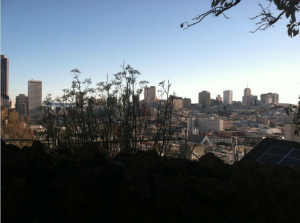 Previous article#56: Meet A Stranger On A Plane, Leave With A Friend.