Hey Kirk,
Let’s be friends. When you make it big, look me up. And you better not forget.
Your Washington, DC, road-tripping groupie,
Lauren 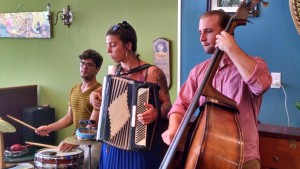 Spending time with a musician is like being entertained by a child on a playground guzzling a coca cola who’s secretly a savant yet somehow undiagnosed.

After several cups of coffee and a vast 4-hour conversation with Kirk, an aspiring jazz musician and New Orleans “swamp” native, the 5-year-old kid in me wants to go bang on the piano and beat on some pots and pans again.

Kirk, a self-proclaimed, one-of-a-kind drummer, has a lexicon all his own.

Peering at his square jaw line and neatly defined features, he doesn’t appear to be the same drummer I met on Frenchmen Street two nights ago. He’s grown years in a matter of minutes.

Words roll off his tongue like a Miles Davis tune. As if he’s consciously scripting lyrics for his next jazz number. There are no buffering or skips in his sentences anymore. Just an easy-going flow of lyrics that I want to feverishly jot down in case they show up on a record album some day.

Right off the bat, he offers to make me a demo tape while he’s shedding some licks with the cats for the show tomorrow. Make me a what, where?

Looking confused, he pipes up:

“Shedding is a ritual of going to the shed to practice music. It’s what I do with the ‘cats’ aka friends like every day.”

It’s obvious from the get-go. Kirk is distinctly 100% New Orleans: laid back, light-hearted, surprisingly humble, unaffected by big city life, a coffee drinker, and a Cajun. When he says he’s “Cajun,” I instantly conjure up a mix of flavorful cuisine and distinctive music from my years of Travel Channel marathons.

ME:: What would you say home is like? Kinda like that History Channel documentary, Swamp People?
Kirk:: Haha, I don’t wrestle alligators, but some kids in my high school did.
Me:: Wow, that’s pretty cool. So, did you grow up listening to Jazz music your whole life?
Kirk:: No, not Jazz per se, but music in general was big around the dinner table and weekend outings. We listened to a lot of Zydeco. (YouTube video to Watch: New Orleans Louisiana Creole Cajun Zydeco Music.)
Me:: So, what gets your juices flowin’?
Kirk: Well, on gig nights, I’m sociable of course, but when a song is playing, I’m totally silent and into the music. That’s just the name o’ the game….also, watching other musicians play too.
Me:: What’s the coolest city you’d like to visit?
Kirk: I’d love to see New York, the biggest and most talented Jazz scene of all. But New Orleans is where the history is. So here, I guess. I did study abroad in Montpelier, France for a semester. Now, that was cool.
Me:: I studied abroad, too, in Rome and Florence, Italy for a semester, squeezing in quick weekend trip to Paris. Now, that felt like home.
Kirk:: Would you go back? To Paris I mean.
Me:: (Pointing to the ground) “This is pretty much the closest I’ve gotten to Paris since then.

Halfway through my asking about his music schedule, his phone lights up and he clamors to the keyboard.

KIRK:: That’s how it works, ya know. You get a call to play a gig and if you miss the call, you miss the gig. I’ve missed a couple gigs just by not hearing the phone ring. The best way to get a hold of me is calling me, I always have my phone on me, just in case.

From my seat on Stella’s outdoor patio, it’s stuffy and hot outside but our conversation is a breeze.

Four hours, one filling Mediterranean Shawarma plate, two coffees and a stroll around the block later, we’ve become instant friends. Sitting at the stained wooden table, he horses around with a paper straw wrapper and I try to decipher each of his facial expressions. 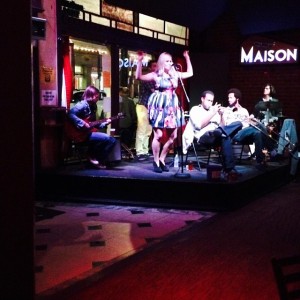 Of all the things about him, there’s one endearing quality I love, his hands. The tips are calloused and the nails, tinged with brown. It’s as if he’s been sketching a masterpiece or drumming away on his guitar for way too long. But then I realize. He’s really an artist like me, perfecting his craft through practice, networking, listening and learning. He’s open to a point. But reserved and mysterious, too. He understands the artist’s life at the age of 22. 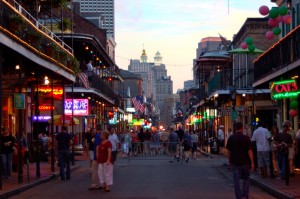 Nearing the end, our table bears the signs of a great convo; a ring stain from coffee and a few scribbled napkins. He’s original and inspiring. And all that’s really missing from his cool cat personality is a fedora.

Next article #7: Hear All That Jazz on Frenchmen St.