After finding out that living with a co-worker NEVER works out (Pro-tip: don’t live with people you work with.), I wheeled and dealed like a Las Vegas casino man to find my next place to call home. Where did I up at? A Grad Dorm.

With no luck searching in San Francisco, I randomly replied to an apartment ad in a Stanford graduate dorm in Palo Alto. The ad was clearly meant for a guy, but I thought what the hell, I have nothing to lose.

“3 guys searching for a 4th sublet; preferably want a guy but will consider girls are who clean.”

I must have had guts, confidence or some kind of magical power, because they liked me enough to let me live there for the 3-week sublet while one of their grad roommates was off in Europe. It was the best 3-week California introduction so far. 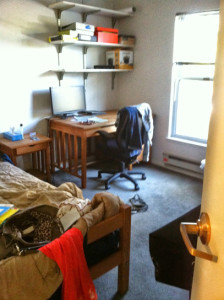 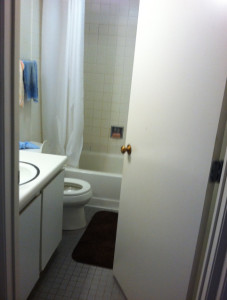 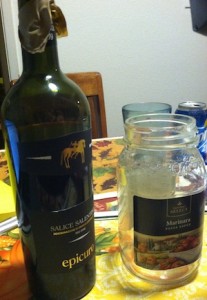 My room came furnished. It was two blocks from the Stanford marketing office. Best of all: the 10 buildings that made up the grad dorm section of Stanford University was full of good-looking and smart people my mom would probably love.

The common space was simple and no-frill, but welcoming and colorful. Every dish in the cupboard was un-matching just like my old dorm room in college. I knew these were good people. Their decorating priorities were obviously in the right place. Last place. Drinking glasses were way more important and necessary to every day living. At the time, the wine of choice was Trader Joe’s Reserve, and the only cup I had to my name was a used-but-washed-out marinara jar. Mine fit the china pattern perfectly.

Overall I was happy, content, doing well and inspired again. It probably wasn’t the most glamorous way of living –– going from loft crashing to shared duplex to graduate dorm to couch in the graduate dorm to perfect apartment in the city –– but I was determined to move to California and start over from scratch. And this was the best I knew how. 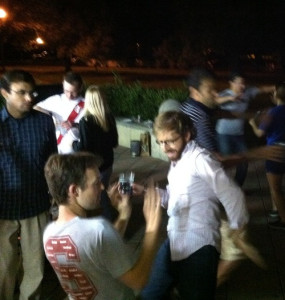 Turns out, I met some truly talented grad students there who were just like me. They were also trying to figure out what the hell they wanted to do with their lives.

Like this moment, just a casual Friday night shin-dig outside the Stanford grad dorms in the main quad. Rachel –– the only girl at the party –– and I are still good friends.

Previous article#66: Bruise Your Ribs Before A Half-Marathon.

Next article #68: Bring A Chili Tradition To The West Coast.