Recap of the night: crash a home game, have a blast, do the student cheer, make some new friends, tailgate like nobody’s business, stumble back to my dorm.

Being college football season and all, I probably should attend a college game. Especially since I work for Stanford University. And especially since there’s only 1 week, 3 hours, and 2 minutes left until the exhibition games start.

My co-worker Kelly must have heard my thoughts. When I walked into the office this morning, she smiled and dropped a plain envelope on my desk and walked away.

“You’re a student. Standing in the Red Zone seats. 30 feet away from the sweat, tears and field. Just be careful of those Stanford kids. They’ll kill you with their claps or fan cleats if they found out your secret.”

The start of the Stanford college football season: I joined my fellow Stanford peeps and stood the entire game (found out sitting was an abomination). Amidst all the chants I couldn’t make out and cheers I couldn’t mimic, I got my first taste of college athleticism and learned a few thing about college football:

At the end of the night when I was meandering back to the Caltrain, I found myself surrounded by a sea of white and red, and for just a minute, I felt a part of the Stanford tradition. 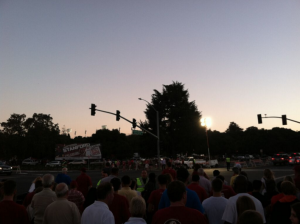 Previous article#68: Bring A Chili Tradition To The West Coast.