DO I WANT TO VOTE?! UMMMM… let’s just say, Frank –– my ardent, democratic roommate –– and I were soooo excited to vote in this year’s primary election and show our disdain for one nominated party in particular, that we named our apartment internet Wi-Fi name accordingly. You can imagine who we both voted for.

“Trump Your Own Horn.” 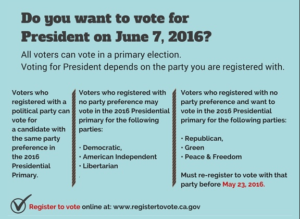