There’s no denying that landing a job in social media –– and at a tech company in Silicon Valley no less –– is pretty tough right now. But, when I think back to that winning interview with eBay (yay!), it was the unequivocal truths I took to heart early on in my career that are paying off now:

Turns out, that leap of faith I took at the social media networking event a month ago paid off. While I thought I was only attending to learn how brands come to life on digital, Ryan, EBAY’s Social Media Manager, apparently had his own agenda and scoped me out.

But let’s get back to how it all went down:

Halfway into the event, Ryan casually piped up from the bustling 100-person crowd of voices and asked out loud if anyone was interested in working for eBay.

Thinking to myself, I chuckled. HA! This non-electronic-savvy, ex-kitchen-made-copywriter from Hamilton Beach sure didn’t. I never cared about cars, x-boxes, play-stations, electronics or motors when I first was introduced to the idea of working at eBay. But as fate would have it, Ryan and I talked for 2 and 1/2 hours and he pointed out some things I’ll never forget.

Lauren, You might not have automotive selling forte, but you have the experience of social commerce writing that could sell a dream. And that’s what counts.

I guess I did sell everyday blenders, can openers and juicers at Hamilton Beach. I wrote punchy stories on Amazon.com and they worked. People invested in their kitchen-centric future, because my blender copy inspired them. Reconsidering the slim 10% shot I had, I slid my card across the table, and Ryan gave me a test in return: to attend the Xbox One Launch Event with him the very next day and write a guest blog post about it for EbayElectronicsBlog.com. 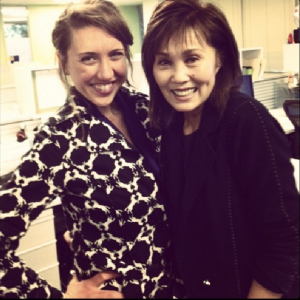 I went. I wrote the story. And I pitched it to Ryan. I must have done something right because my story worked. A week later, eBay called me in to see about this “ability to sell a dream.” After five rounds of interviews, advice from a tough critic (Thanks, Ninad!), a four-hour-long campus tour of seven buildings and phone call with a brand visionary, I passed in some kind of flying colors.

Never thought I’d be a Valley girl, or come to love tech, but starting this new role in early January, I feel pretty darn lucky. And I can tell the adventures are only just beginning.