The Campbell Farmers Market in downtown Campbell, CA. It’s a must-stop if you: 1) Are ever in the San Jose area 2) Need a coffee fixin’ 3) Feelin’ the “hair of the dog” 4) Are craving mouth watering fruits or 5) Feel like waking up early and being productive.

I woke up at 7:02 AM this morning to two friendly licking dogs and a meowing kitty, so I decided to keep up the momentum and make it a farmers market morning. Funny, I’ve only gone twice in two months, but now at every turn I smell and see new ripe peaches, apples, oranges, hummus flavors and espresso at every turn.

Four hours later and a mile-long stretch of stands later, I conquered every stand, sipped enough coffee for three and caught up on new conversations with old friends. Apparently an eBay co-worker and his wife (hi, Andy and Traci!) were also starting their Sunday the same way. Before I knew it, an hour went by, a round of mimosas, laughs and jokes happened and my stomach was grumbling again. Peeling myself away to the farmers market walk, I sampled my way back to the car while taking in the smells of salted kettle corn, nutmeg coffee, cinnamon pastries, garlic feta cheese and vanilla-infused something.

Wow, if this is the stuff of Sundays in California, I think I’ll stick around. Forever. 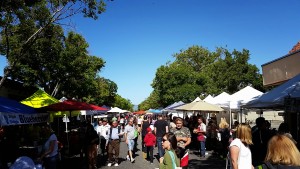 Previous article# Take a European Vacation to London and Amsterdam.

Next article #Off-Road on Mt. Tam, Run a Race Up The Mountain.